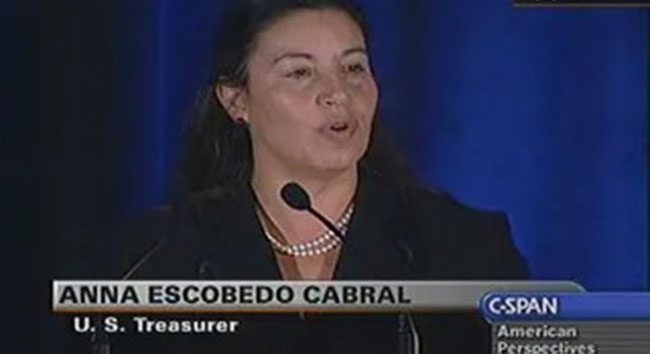 Valaurum, Inc. announces the appointment of Anna Escobedo Cabral, Former Treasurer of the United States, to the company’s Board of Advisors. Following the selection of Ms. Cabral, the Board comprises nine advisors with extensive experience from a variety of national and international governmental agencies and industries.

“I am thrilled to welcome Anna Escobedo Cabral to Valaurum’s prestigious Board of Advisors,” says president and founder of Valaurum, Dr. Adam Trexler. “Ms. Cabral’s experience as the 42nd Treasurer of the United States and her experience as Unit Chief for Strategic Communications in the External Relations Division of the Inter-American Development Bank significantly strengthens Valaurum’s world-class team in the field of money and minting.”

Anna Escobedo Cabral served as the 42nd Treasurer of the United States from 2004-2009. While Treasurer, Ms. Cabral oversaw the infusion of new currency designed to combat counterfeiting efforts. She also provided advice and counsel to the Treasury Department in its efforts to provide economic assistance to devastated areas in the wake of Hurricane Katrina. In 2007 Treasury Secretary Henry M. Paulson named Ms. Cabral as his representative to the Community Development Advisory Board.

About her appointment, Ms. Cabral stated, “I’m thrilled to be joining Valaurum’s team at this really exciting juncture for the company. Valaurum, a team on the cutting edge of physical products in this space, is well positioned to meet the escalating demand for monetary instruments in precious metals and cryptocurrencies. Making gold, silver, and crypto more easily available to a broader audience is important and I look forward to helping this team take this company to a global scale.”